If you are new to e-cigarettes or vaping, then you’re probably wondering what all the fuss is about? Smokers are making the switch from traditional cigarettes to vapes and e-cigs in the thousands. Traditional nicotine replacement therapies, or NRTs, are okay, but none of them really replace the sensation of smoking like vaping does. 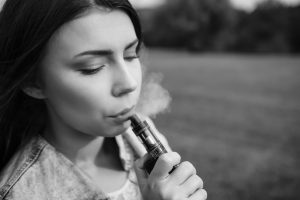 So, what is vaping, and how do you get started?

In the following guide, we’ll go through what vaping is, how it works and how you can get started with a healthier and more affordable option than smoking traditional cigarettes. Then the end we have a few links with some recommendations of vaping products.

There was a very interesting and thorough report conducted by Public Health England. Now, you may be aware of this report, but most people aren’t. Everyone has heard the stories of vaping or e-cigs producing formaldehyde and vapes and mods exploding in people’s faces, but big pharma and mainstream media don’t really seem like to promote this article.

The report studies the effect of e-cigarettes on smokers and non-smokers. There were some interesting things which they discovered! We won’t go into the whole report, but we’ll give you a couple of quick facts to think on.

Before you listen to anyone or make any decisions about vaping, do some of your own research and check out some of the interesting articles on vaping available online. 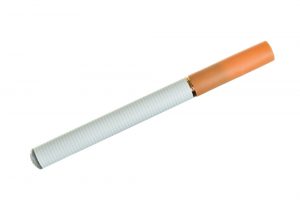 What is Vaping or E-cigarettes?

Vaping, vapes, e-cigs, or e-cigarettes are nicotine delivery systems powered by a battery. They contain a liquid which is flavored and can contain nicotine or be nicotine free.

There are thousands of different types and models to choose from. Some beginner’s kits start at as little as $10 and range all the way up to expensive mods for $200-$300. It is advised that new vapers start off with a beginner’s kit and then move up to the more expensive models as they become more experienced at vaping.

The product that most vapers experience is a mini e-cig or cig-a-like. These are similar to the disposable products you can buy from gas and convenience stores, except they’re refillable. They are made up of a battery, atomizer, clearomizers and a mouthpiece. They are shaped like a cigarette, simple to use, cheap and easy to carry around during the day.

Many vapers never make the switch from this style of vaporizer, preferring the lower price and ease of use. There are hundreds of different models, with many coming with two batteries, two flavor cartridges, and a charger ready to use. 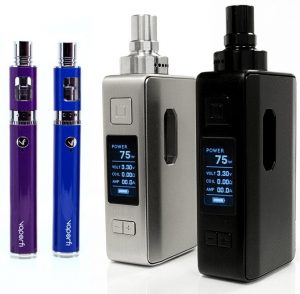 After you have been using the pen style vaporizers, you may want to start looking at upgrading to a more powerful vaporizer. Some just produce more vapor, and some even allow you to fine tune air settings if they have adjustable settings, allowing you to enjoy a bigger range of e-juice and e-liquid flavors.

These bigger vaporizers are known as vape pens, mods, box mods, sub-ohm mods, and temperature control mods. Once, these devices were custom made, and dangerous for beginners, but now there is a large variety of safe, high-performance mods available on the market.

The battery inside the vaporizer heats up the coil inside the tank turning the e-liquid into vapor. The vapor is then inhaled much like you would draw back on a traditional cigarette.

What is the history of e-cigarettes and vaporizers?

A Chinese pharmacist, Hon Lik, is credited with becoming the main inventor of e-cigarettes in 2003. Hon Lik was a heavy smoker and invented e-cigarettes to switch from smoking traditional cigarettes to a healthier option. E-cigarettes have continued to gain popularity around the world despite heavy regulation by many governments.

What is E-juice or E-liquid?

The liquid inside e-cigarettes and vaporizers isn’t oil; it’s water based. It is known by a bunch of names, such as e-juice, e-liquid or vape juice. It’s available in thousands of different strengths and flavors.

VG is very thick by itself, making it difficult to use in the more basic styles of vaporizer. Nicotine ranges from 0mg up to 18mg. The final ingredient is flavor, and there are thousands of different flavors and combinations to choose from.

If you’re tired of smoking and looking for a great alternative, then why not give vaping a go! Don’t rush out and buy the most expensive mod available and a bucket of e-liquid. Try some of the beginner vaporizer kits available, get a variety of different flavors until you settle on some that you enjoy.

Go Here To See Our Recommendations For Cigalikes / Mini E-Cigs

Go Here To See Our Recommendations For Vape Pens and Tanks

Go Here To See Our Recommendations For E-Liquids

What Is The Cost Of Vaping?