One of the earliest American vaping companies, NJOY, has undergone many changes over the years. Their line of e cigs and other products has grown. They started with the most authentic and strongest e liquids for vapers sticking with tobacco or menthol like real smokers.

Now they still carry high-quality products for purists but also sell a series of e liquid for gourmet palates and advanced vaping equipment. Their customers are more experienced now, so the catalogue reflects their changing tastes and needs.

I do not find this the most user-friendly of sites. My main concern is that products aren’t described fully, so I always feel like I want to know more about nicotine levels or whether this or that product is rechargeable or disposable.

It is professional in appearance: bright and attractive. Pictures are well presented and clear. I love the bulk ordering options which make vaping with NJOY more affordable. Some of their prices are a bit high, but that’s rectified by sale pricing and bulk ordering, and they often run discounts and promotions. They also ship items for free no matter how large or small an order is and provide a 30-Day Money-Back Guarantee. 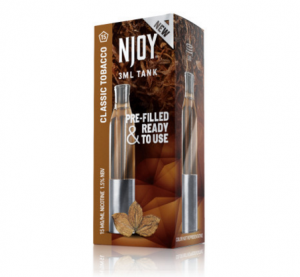 Here is the usual routine: you buy an eGo with a clearomizer. The clearomizer is empty, so you fill it with e juice then you do that all over again. Rarely do you find a system that uses pre-filled tanks.

NJOY has released a series so you don’t have to think about the work or handle the potential mess of filling your own tanks with flavor. They sell singles and packs containing from 4 to 16 tanks in increments of 4.

Their flavors are Tobacco, Menthol, Blue and Blackberry, Vanilla Bean, and Peach Tea. Singles cost $5.99 (about $2 per/ml) but you won’t pay that much if you order packs of 16.

The battery for these pre-filled tanks costs $19.99. Again, buy more (3) and pay less. In this case the price is fine, but remember that refilling your own e juice costs less. NJOY e juices are made in the United States.

Standard e juices from NJOY are those mentioned above and more. They carry Iced Fruit, Wild Berry, Pomegranate, Blood Orange, and Single Malt Scotch. That last one should raise some eyebrows. There is no alcohol in the bottle, so don’t get your hopes up. Each 10-ml bottle costs $7.99 and comes with 10 mg or 15 mg of nicotine per/ml. That is the first series of e juices.

When consumers switch to tanks and APVs that blow huge clouds and use high-tech systems like an XCube or eVic, they should also upgrade their e juice. A fine system deserves better liquids. You want something thick to create a dense cloud of vapor. The Artist Series by NJOY could be your vape juice of choice.

There are 5 bottles, $22.99 each, containing 30 ml at a time. Buy them individually or purchase the five-pack presented in a classy black box priced $114.99 (no discount). Each one was blended by someone considered “famous” in the vape juice world. Titles include Dragonscape and Hedon’s Bite. 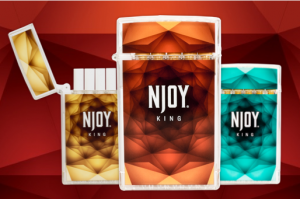 Disposables: Where It All Began

For most vapers, smoke-free living started with an experiment. They spotted a brand of disposable e cigs at the gas station and decided to give it a try. It was impossible to do more damage to their bodies than they were already creating with cigarettes, so what did they have to lose? What turned out to be a better habit was also an easy transition. One of the first brands to hit garage shelves was NJOY.

They continue to sell their award-winning Kings in convenience stores, etc., but also carry them online. Buy bulk packages and share them around or keep some on hand for trips so you do not have to charge batteries or fuss with refills. A King could last all day long.

The “Daily” is another NJOY disposable. These new e cigs come in Menthol, two types of Tobacco, Black and Blueberry and cost $5.99 and up (that’s for a single). NJOY is looking for authenticity even though their tobacco flavors are touted as some of the most realistic already. Daily disposables appear to be smaller than Kings which is the point: they emulate the feel of a cigarette more closely than their big brother does.

Even though NJOY is developing a reputation among intermediate and advanced vapers with their higher-powered devices and quality e liquid, they still satisfy the green consumer who likes the simpler things in life. Their rechargeable kits start with a $19.99 set featuring two 110-mAh batteries and two flavor chambers (atomized cartridges) plus a USB charger.

It’s on sale right now for $7.99 which is about what you pay for one disposable e cig at the gas station. The batteries are light-weight but you are just getting started as a vaper: there are bigger systems in your future. Kits containing more equipment (more chargers and refills) are also on sale. They feature the same batteries and the same flavors: Gold Tobacco and Menthol. The most expensive kit is half-price.

Flavor Chambers (known elsewhere as cartridges or cartomizers) are pre-filled e juice containers for use with the 110-mAh rechargeable battery. They come in Bold or Gold Tobacco, Menthol, and Pomegranate. Packs of 5 cost $13.99 which is a little on the expensive side at just under $3 per/ml. Order 50 of them for $109.99 and pay just over $2 per/ml.

Besides their eGo devices, NJOY also carries advanced products by other brands. They list the eLeaf iStick, Vapor Shark rDNA 40 Watt mod, and an AC Nautilus Mini with Aspire coils. The Nautilus Mini is compatible with all of the mods above and more besides. Each of the devices above is designed for sub-ohm vaping and is particularly well suited to a bottle of Artist Collection e liquid.