White Rhino has been on the vaporizer scene for some years, making both herbal and e cig vaporizers for the online market and general vendors. You will find their products at smoke shops and over the internet wherever good quality products are sold. The company has established a reputation for longevity and creativity, and they show it with their Dube Vaporizer. 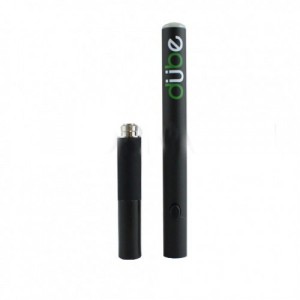 The Dube in Many Shapes

There is not merely one Dube but several. First there is V.1 of the Dube followed by the Dube XS, Dube V2.0, and a disposable Dube. These join several other White Rhino products including the Trifecta.

One thing that differentiates the Dube from a Trifecta or, indeed, many of its commercial rivals is the shape of it: so much like a cigarette. These little vapor pens look much like e cigs that they could be mistaken for one. They are even made in many similar colors.

That pen-shaped item is easy to conceal and to use like an e cig so no one will know that it is an herbal vaporizer containing tobacco or other aromatic materials unless you get close enough for them to smell the vapor.

You do not have to be doing anything illegal to feel judged and stared-at when vaping. Many individuals will mistake you for a weed-head simply because of the name: Dube. It has a certain ring to it.

The Dube V.1 was for use with herbs and waxes only. A Dube XS is also used with waxy oils and herbs. A Dube V.2 can be filled with herbs, liquids, or wax. This is the way technology is going. Vaporizer companies are seeking a place in this niche.

The Dube 2 is packaged with a battery, cleaning wipes, dabber tools, and an extra herb cartridge. An e liquid tank is supplied, tweezers, a brush, and a USB cable.

The Dube XS uses a rubber mouthpiece. In the past it was made of plastic, but that proved too hard so rubber was wisely adopted. Rubber makes for a much more enjoyable experience.

Disposable e cigs are far more common than disposable wax or herb vaporizers. They are made from one entire piece all connected. The battery is already charged and cannot be recharged when it runs out of life. A cartomizer contains e liquid and the atomizer with its heating coil. Once finished with, it is disposed of, preferably in an e waste bin.

The Dube disposable operates in a similar way for $11.99. It is made with a non-rechargeable battery. The tank can be thrown out. You just have to add wax, but once you get 100 puffs or so out of it, throw the whole thing away.

White Rhino and vaporizer companies are a little behind their e cig counterparts on this score: they do not promote recycling in the way e cig companies do. Rather than just disposing of the one-time-use vaporizer, find a recycling bin and take care of it responsibly.

Pros and Cons of the Dube

You have to accept that a pen-sized vaporizer will not be able to utilize a powerful battery that lasts for hours and still create high enough heat to vaporize all of your materials. The Dube V.2 costs about $45 or more, so its price is a give away too. If you learned something in economics class or from listening to your parents selecting appliances, it might have been to discount the cheapest and highest-priced items, leaving you with a band of potential products in the middle. The Dube is pretty cheap to buy.

But White Rhino has a reputation that should give the consumer a bit of additional comfort. They didn’t just pop up out of nowhere to join the surge of interest in vaporizers and e cigs.

Also, being a 3-in-1 device is exceptionally handy. Vaporizers often use both types of devices so they can put cigarettes to one side for good, but still ease their way into a nicotine-free life one step at a time. Herbal vapor tastes more like cigarette vapor than e liquid vapor does.

But there will be times when the taste of vanilla custard or kiwi-strawberry vapor grabs you more than tobacco. White Rhino has made a positive move by adding their name to a growing list of 3-in-1 options.

But if you are going to invest in this smoking alternative, do it right. Keep the Dube for emergencies. Make the Trifecta your go-to vape. It uses herbal materials, oils, and wax. With one-battery activation, it operates simply and easily in a small package that takes seconds to heat. Varieties of the Dube are more colorful and smaller than this black package, and the Trifecta’s $150 price tag is a lot higher, but you are likely to enjoy better vapor and battery life.