Lost Vape uses an Evolv DNA 40W chip to bring you an unusual style of box mod: one of the boxiest, you might say, given that it forms a rectangle so wide it is almost a square.

That’s where the ESquare DNA40 TC by Lost Vape gets its name. Do the math: you get American-made technology, style, and quality for a price of $145 or more, but safety you can’t find anywhere else. That’s priceless. 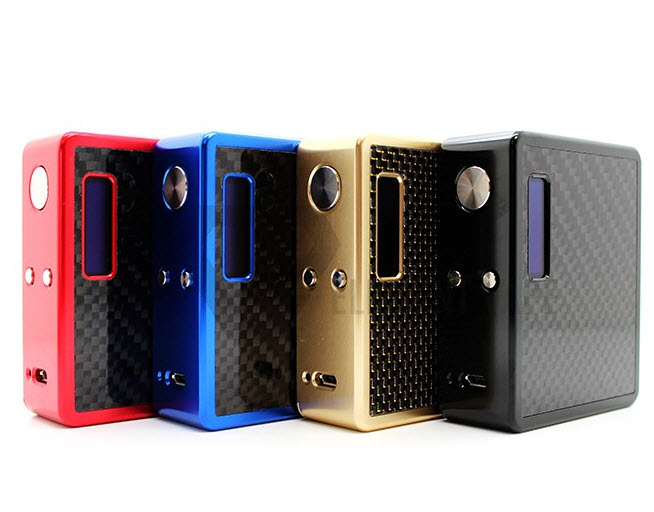 Lost Vape’s system is designed to help you use less power to create more heat, although that is largely due to Evolv’s handiwork. The TC mode of vaping which regulates temperature output to enhance vapers’ safety must be used with temperature-sensitive coils and these are also part of the equation which gives you an efficient vaping experience.

Low watts on a Ni200 or Titanium coil provides constant, uniform temperature burning hot (though not too hot) but without requiring a lot of energy from the battery or a lot of juice either. You burn less e liquid in the process and these special coils don’t create a burnt aroma or flavor. Don’t waste your cheap e juice on this gorgeous mod. Pick out a decent type of liquid like Charlie Noble, Cosmic Fog, or Suicide Bunny.

Which atomizer are you going to use with the ESquare?

That’s up to you: an Aerotank would work fine on days when you set the box to moderate or low output. When you choose to set wattage on full or opt for the top temperature (around 600F), that is the time to attach a Kanger Subtank, the Aspire Atlantis, or an RDA. With a stainless steel, spring loaded connection customers are assured of:

That gives you the flexibility to choose a model from Eleaf (the Melo 2), Horizon (Phantom), and more.

The ESquare DNA40 TC by Lost Vape is CNC milled, not factory made among masses of other examples. Lost Vape utilizes 6063 T6 aluminum: the tough stuff applied to the making of airplanes.

That feature and the use of ball bearings to create a sliding battery door give the ESquare a masculine, industrial edge, yet its modern appearance will make you think of a nightclub with its choices of gold, black, and silver exterior. Panels are replaceable too so you can modify the ESquare too.

Insert two 18650 batteries behind the sliding door and remove them to charge. A USB port on the side below three sensitive buttons lets you use the ESquare as a pass-through vaporizer at 500 mAh. With a battery connection made from copper, you are sure to enjoy constant and excellent conductivity. Copper is your friend.

They make no bones about the size of their screen: Lost Vape added a small one which sits in one top corner on the face close to buttons. It is a bright OLED screen showing volts, watts, temperature, and ohms.

Your lowest possible resistance using TC coils and temperature control is 0.1 ohm with a slightly higher minimum of 0.16 using watts and Kanthal wire. The screen is very good: it’s powered by the Evolv chip too.

While the shape is unusual and appealing as a result, the ESquare is still compact. It’s wider than you would expect at 57 mm but short (just 72 mm) and narrow (25 mm).

Don’t forget the chip by Evolv which, though small, packs a big punch. This is your defensive wall providing protection against a shorted circuit or overheating.

There are few things in this world so small and yet so powerful but the Evolv 40W DNA chip is one of them. They have also released a 200-watt chip with the same features but more potential power which is featured in a selection of excellent vaporizers.