At Innokin, their product catalogue is dominated by iTaste items: the CLK, MVP, SVD, etc. A separate section lists their Cool Fire e cigs: numbers 1, 2, and 4 (where 3 went I do not know).

Each one has taken on a different shape from the rest, but I can see a merging of elements between the Cool Fire IV and their iTaste MVP series plus inspiration running through a series of variable watt devices that look a lot like this latest Cool Fire.

They are not all copies of each other, each one is distinct. But I would say the Innokin Cool Fire IV resembles the MVP 3.0, an iStick, the Vox II from VaporFi, and the Kanger KBox. This is not a bad thing. 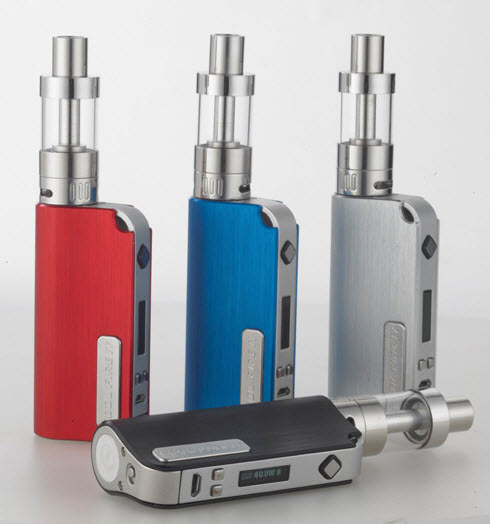 All of the items I just listed are compact and sleek rather than bulky and industrial. I like them all for their compact and practical sizing. A slight difference is that single rounded top corner, like an off-the-shoulder dress, plus an extended selection of colors. Innokin has made the Cool Fire IV in 6 colors if you can get them from retailers. Some don’t list any choice of shades.

The Cool Fire IV features the latest and most important safeguard you could want: temperature protection. If the device seems to be getting too hot, its built-in control panel will detect this and reduce heat by lower watts.

Several vent holes are organized prettily along the battery casing to let out heat. Other safeguards protect against a short circuit and over-discharge. You do not need reverse battery protection: power is built in with an 18650m, 2000-mAh cell you charge using the USB port.

Use the Cool Fire IV during charging as you would an MVP or iStick. If you hate that feature, this is a problem because the Cool Fire IV battery is not coming out. Try to remove it and you void the warranty. A lot of box mods are made this way and I think it’s a practical feature, especially since 2000 mAh gives you a lot of vaping time. Just remember to charge overnight.

What reminds me of the MVP isn’t so much shape but the arrangement of buttons and screen plus battery-light indication. Like iTaste products, this one indicates battery level by flashing a light: green (full), yellow (mid-level), or red (low power).

The screen is situated between one large firing and mode-selection button and two buttons placed side by side (not forming a vertical row) like a pair of dimples. Size-wise, the two are also similar but the MVP is more geometric. There are softer elements to the Cool Fire IV which are so completely different from a Cool Fire II that I still can’t put it together: how are these parts of the same series?

This is a sub-ohm box mod featuring a 6W to 40W range or 3V to 7.5V, 14.5A maximum, and a low of 0.2 ohms. Choose one in purple or blue (just for a change) and you will own one of the most compact box mods at just 86 mm in length. Of course, the addition of an atomizer will change that, but it’s spring loaded. Pick whichever subohm tank or RBA/RDA you want, be it the smallest item available or one to match the color of your mod.