In a market increasingly obsessed with box mods and variable voltage or wattage, the MVP is a baby. This Innokin device looks so puny and feminine compared to many of its boxy counterparts, but that might be part of its beauty and popularity. It’s also so popular there are lots of fakes, so always insist on buying authentic Innokin products backed by a warranty and the excellent Innokin reputation. 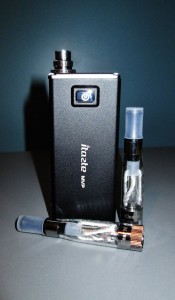 The Innokin iTaste MVP 2.0 really is slender, the way slimmed-down versions of cylindrical e cigs are designed to be a gentle introduction to vaping for women who preferred Virginia Slims. Customers need to get used to the idea of an e cig that is shaped like an iPhone, not a cigarette. The iTaste MVP could supply the easiest introduction.

But part of its allure is looking like a cell phone or an iPod: most people have one, so holding and vaping with an MVP is as natural as talking into a cell phone or texting on an iPod. It is also deceptive to the untrained eye and, thus, discrete.

At the same time, being slim, it is light for small hands and easy to use for those who are relatively new to vaping and desire a high-powered battery but not a bolt-shaped e cig reminiscent of a thick smelly cigar. The colors are not electric but muted and pearly: very womanly.

Why Vary Voltage and Wattage

With the power to change volts or watts and to select a tank according to resistance, you also hold the power to adjust the temperature of your e cig. With this power plus an array of e-juice propylene glycol/vegetable glycerin ratios, you can virtually dial in the thickness of your clouds and power of throat hit.

For roughly $50 to $80, an iTaste MVP 2.0 package (their most recent model) is available from dozens of retailers and online. It features a built-in battery and might also arrive with an iClear clearomizer (16 or 30), perhaps even e-juice (Mount Baker Vapor, for instance, sends out a bottle of e-liquid with your order).

A built-in battery is not everyone’s favorite feature because your device lives only as long as the battery. Still, a new version of the MVP will probably be released just about the time your 2600-mAh battery gives up.

Adjust wattage by 0.5 watts at a time to a maximum of 11. The MVP is capable of 5 to 11 volts, 0.1 volts at a time. A puff counter helps you keep track of how long your battery’s charge will hold out or how many puffs before your e-liquid will need refilling (though you can also see the level reducing as you vape). A voltage memory feature recalls the last setting you chose so that if you turn it off and then turn on again, your MVP will automatically choose this value.

There is also a pass-through feature so that if you are close to a USB outlet and are using a long cord, it is possible to vape and charge while you work at the computer.

Use promo code 10OFF for 10% off at Mount Baker Vapor!