Joyetech’s eVic VTC has proven to be a popular addition to many sub-ohm collections or collections of high-powered Joyetech gear, but now they bring even more selection to discerning vapers with a VTC Mini Kit. Enthusiasts will recognize some similarities between this mod and the Kanger Subox Mini, but no matter: more choice is always better for vapers because it inspires high quality and low pricing.

Small buttons on the box mod have that soft, black, rubbery look you will recognize from the Kanger Subox mod, but they are set in a frame colored black, white, or Cyan (a fancy name for light blue-green). 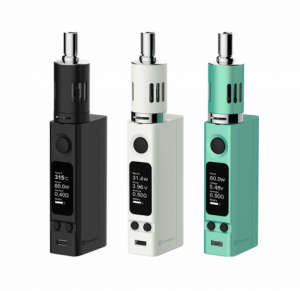 Switches surround a small but bright screen displaying the battery power icon and ohms plus either watts and volts (in VW or By-pass mode) or watts and temperature (in VT mode). By-pass mode allows users to select voltage.

The eVic VTC Mini Kit comes with an eGo One Mega Atomizer featuring a glass tube and cover with narrow windows. The atomizer comes with two CL heads (Ni and Ti) plus a mouthpiece. Even though it was made for the eGo One, this atomizer looks perfectly suited to its alternative home on the eVic VTC Mini.

Those two heads were chosen for quality since high-grade nickel or titanium will not burn down as quickly as Kanthal or Nichrome. They are also temperature-sensitive, allowing one to reach those very low sub-ohm values that push resistance to its limits.

The Joyetech eVic VTC Mini offers resistance measuring as little as 0.05 ohms in VT (Variable Temperature) mode, so if you want to push the boundaries, here is your chance. Using Variable Watt or By-pass modes, the lowest resistance isn’t shabby either: 0.1 to 3.5 ohms.

Most people would settle for that. Your wattage range is 1 to 60: that is plenty of power for cloud-blowing competitions. If you aren’t competitive, that range still lets you customize vapor to personal specifications.

Benefits of Running a Temperature

If you select Variable Temperature mode, the parameters are 100 to 315C or 200 to 600F which are the usual limits. These allow you to protect against dangerously high values which sometimes occur at high watts without the user realizing it.

Well-made box mods are protected against high temperatures by automatically lowering output, but being able to select a temperature allows you to be proactive about safety. The same thing happens (watts are automatically adjusted for temperature) but you have more control over what’s going on.

Recharge with the eVic VTC Mini

Joyetech does not say this is a pass-through mod but you can recharge it directly using the micro-port set into the mod’s side, so it is possible you could vape and charge simultaneously. Charging should take about 3 hours when the battery is relatively new.

Replace batteries and recharge using a separate charging device if preferred: your single cell comes out easily through a magnetic back cover. Many people find this convenient because they can carry on vaping anywhere with a fresh battery, no wires attached.

American sub-ohm vapers could pick up the eVic VTC Mini mod alone for around $40 or more. If you already own a Joyetech eGo One Mega atomizer this is fine: your set up is complete, although having a spare tank around isn’t a bad idea.

Many other tanks will operate well here too, including Kanger’s Subtank, but they won’t come in “Cyan.” Kits are often great value and you receive the tank for less this way. A kit is selling for anything from just under $50 to over $60 with the mouthpiece included but without a battery.