Where do vaporizers come from? Where to they get their start? The Iolite was developed by Oglesby and Butler Ltd, makers of butane-powered devices since 1984. The Iolite entered their product list many years later after they had become masters of their craft: 2008. So, the Iolite is a relatively young product from an established business. They manufacture their vaporizers in Carlow, Ireland. 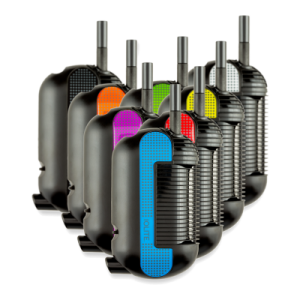 For $129, you can own a butane powered portable vaporizer that is quiet and efficient; light and beautiful. The Iolite looks like a walkie talkie, especially with the silicone mouthpiece extended out fully. This part is soft and flexible and can be folded away.

The outside has rounded edges and is vented to prevent your vaporizer from overheating. An overly-hot vaporizer can cause your herbs to catch fire and will become unbearable hot to hold. Eight colors are available. Owners of the Iolite highly recommend that new vapers give it a try.

How Does the Iolite Vaporizer Work?

The Iolite catalytic heater converts butane into power without using a flame. Just press the ignition button (as you would with a lighter) and it will get going, but you might need to press it more than once. To fill it, switch the device off. Turn the Iolite gas valve up. Add a canister and fill your valve until a little gas drips out.

When filling the chamber take the whole thing out. This allows you to minimize mess and isolate it so the machine is not affected. Turn it on and an orange indicator light remains on as long as it is heating up. When it turns off, the ideal temperature has been achieved, but there is no method to control this. After less than a minute you should arrive at 190C/375F.

What is significant about a figure of 375F? The highest value achieved by many devices is over 400F which is very hot. If you can set the temperature at all that is a bonus and lower values are possible. Many herbs perform best at lower temperatures.

You cannot set the Iolite to a lower or higher temperature, so if 410F is about the highest you would go then 375F is efficient without overheating herbs or causing combustion.

Fill Up on Herbs

Fill the chamber to about ¾, leaving space for hot air to make its way around your herbs. You should manage about 10-15minutes of vaporizing on a single load if you take it slowly. Only use dry materials in the Iolite Original.

Profile of the Iolite Original

There are no cords or batteries to get in the way of its slim profile. Turned to the side this device is hardly there which makes the Iolite that much more amazing. O & B sells their unit from the company website where it is currently on sale for about $90. Many other retailers, especially those specializing in high-quality vaporizers, carry it for around $129 and up.

A spare bottle of butane costs about $10 or more. Don’t forget to have some of those on hand.

Who is the Iolite Original for?

Do you spend a lot of time off the beaten path? Are you active; the sort of person who hikes, bikes, and climbs mountains? Does the first snowfall signal long days of skiing or the last frost tell you it will soon be time to strap on your water skis? If so, then you are often away from a USB power port such as a computer.

If you cannot recharge your vaporizer, what is there left to do? You could replace the battery regularly or you could use a butane-powered item with no recharging necessary. The Iolite is particularly designed for people who spend a lot of their day away from a power source.

Does this mean it is the only option for active individuals who travel, hike, etc? As mentioned above, you can bring spare batteries instead. The Iolite is not your only choice. Butane is a relatively unusual power source for vaporizer consumers. Most units are designed to take batteries or have built-in batteries.

But batteries are not environmentally friendly despite recycling options, not even rechargeable ones. All that lithium is a hazard to the environment and it doesn’t grow on trees. You could find yourself paying more to operate an electronic vaporizer just owing to the cost of batteries.

Moreover, if you buy the PAX by Ploom for instance, it has a built-in battery. If that dies after being recharged hundreds of times what are you going to do? You have to buy a whole new PAX. The Iolite is more flexible than that and a whole lot cheaper.

If you like that design, Oglesby and Butler Ltd have also created the Wispr (now onto its 2nd version) which is also available in attractive colors, portable, light, and quiet like its sibling.