Many of the box mods you can buy right now, especially those offering 30 watts or higher, look alike. They are the same shape, often finished in the same sorts of colors, feature buttons and screens in the same places, and make you wonder if the Chinese manufacturer simply produced hundreds of thousands of the same thing only adding various logos for a number of companies. 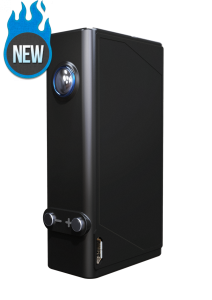 In fact, that is exactly what they do. Sometimes these devices are styled to look like better items or products made in the United States in smaller batches, but often it is the logo which accounts for a higher price, not better quality. The Vapor Shark rDNA was custom-designed specifically for Vapor Shark so it does not look exactly the same as other 30 Watt mods, although it shares many of the same features.

The rDNA, like most other box mods, was designed to combine high wattage vaping with sub-ohm atomizers. When resistance is low, the temperature becomes hotter. Many box-mod vapers prefer high-viscosity liquids because between the low resistance and high wattage they are able to achieve excellent vapor clouds for their own sake or in competitions. Generally, vapers don’t concern themselves with these kinds of things so box mods attract a niche audience.

The Vapor Shark rDNA has a built-in Evolv DNA 30D chip: the only part not made specifically for Vapor Shark. You find it in a lot of 30 watt box-style e cigs. This chip is what enables you to set wattage on a tiny device about the size and shape of a black wallet (3.25 inches long by 1.67 inches wide and 0.92 inches deep).

It is the most compact e cig of its style according to Vapor Shark, and you know what that means: someone is probably already trying to make a smaller one that is equally as efficient and effective. The chip is upgradeable for a time when a new version comes out so the box itself is useful even if the insides become obsolete.

A few box mods come with built-in batteries. With the Vapor Shark rDNA Box Mod, there is a battery included (a Sony 2100 mAh VTC4) but this is removable. In other words, you do not have to recycle your box when it stops recharging. It is also possible to use this as a pass-through e cig.

Purchase the VaporShark rDNA directly from Vapor Shark for about $170. When you do, they send out a 30-ml bottle of their e liquid in the flavor and strength of your choice for no extra cost. That means you get the box mod, an 18650 Sony battery capable of holding its charge for more than a day, plus a week’s supply of e liquid while still paying less than most such devices cost without so much as a battery.

Are There Any Negatives?

Although the rDNA sounds impressive, it does come with some warnings. For instance, there is no protection against reverse polarity: that is, putting your battery in the wrong way. If you do this, the warranty on your device will not cover the damage. Otherwise, read reviews about the Vapor Shark rDNA. There is nothing fancy about it, which is the point: it’s meant to be functional, not stunning.