This is a mouthful: Viva La Vape Revolt Vaporizer. As vaporizers go, it is perhaps the one with the most suggestive name, meaningful in ways which some consumers might not understand. This is about the power of the people to make a choice; to vape if they want to, maybe even to take drugs if they want to. Whether you agree with this notion or not, the statement is still powerful and evocative. Consumers have more choice than ever, even if they just want to replace their smoking habit with cleaner, safer vapor.

The Revolt is not associated with claims that vaporizers are completely safe but they are considered safer than cigarettes because vaporizers cut out around 80% of the toxins associated with burning tobacco. Because this is a tabletop box mod, there is space within the box to ensure heat and herbs remain at a safe distance from each other. You do not want to burn your herbs. That would defeat the lofty purpose of removing combustion from your vocabulary, at least in this area of your life.

A lot of the time, box mods receive a reputation for being low-tech, low-performance options. They are also cheaper than many other vaporizers, handheld or tabletop, so their credibility comes into question. Box mods are not glamorous or unique looking.

The Viva La Vape Revolt is a digital box mod. You set the temperature digitally and settings are exceptionally accurate, as is generally the case when you compare analog machines to digital ones. It still has to be plugged in and is a desktop model only, but mains power provides consistent and usually reliable power for long, happy sessions of vaping. 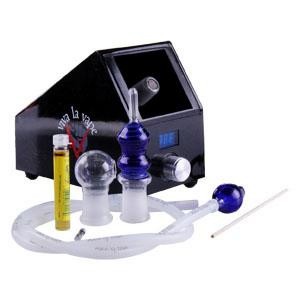 This box mod is a hands-free device using a ground glass whip. That means it does not move around but rests in a single place so you can draw vapor but also write a letter, play a video game, or knit a scarf. This leaves you much more freedom, but it can affect the way herbs taste and how efficiently they are vaporized. Usually, you need to remove the cover and stir herbs when you are using a ground glass system. If they are not regularly stirred, heat does not circulate evenly through an entire load.

Box mods come in a variety of box-like shapes, this one being the reverse-tilt. It’s high at the top, shorter at the back, and black around the outside. The Viva La Vape Revolt Vaporizer was designed for use only with aromatherapy herbs and essential oils.

Although the outside is cheap-looking, made from sturdy plastic, the heating element is made of glass and ceramic. That is an excellent combination ensuring pure tasting vapor. Though neutral, both materials absorb and conduct heat evenly.

Inside, a replaceable fuse saves you from having to buy a new box mod simply because there was a power surge. Anyone who has had to replace a mod because the fuse blew will understand how frustrating and costly that is. In the case of the Viva La Vape Revolt, it was built so the fuse is accessible so all you do is change it with one of the fuses supplied.

The Viva La Vape Revolt vaporizer is simple to use and to clean. Set it to as much as 400F in minutes. It’s not stylish but functional, practical, and inexpensive: around $70 to $80. A kit contains 5 replacement screens, and a wooden stir stick.