The White Rhino Liquid Touch makes use of technology you have seen in many other applications. It’s popular to turn things on and open them without having to touch anything: sinks in public washrooms, soap dispensers, garbage cans, and paper towel machines.

Benefits of this advance include hygiene and reduced wear and tear. Buttons on e cigs and vaporizers wear out; they start to rattle and threaten to fall out. As for the hygiene part, you can’t avoid holding your e cig so it hardly matters, but what a lovely touch, especially for arthritic hands.

The cost of this technology is coming down so do not be surprised to see a touch-sensor electronic cigarette costing $50. Vaporize oils or e liquids with this White Rhino device which goes one better than single-button batteries: it’s button-free. 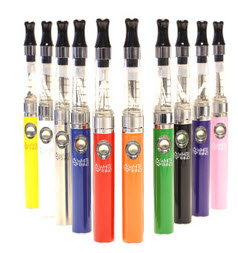 First thing I noticed doing this review is that this is just like any other e cig you would see on a vaping website such as a Kanger or a VaporFi Pro. The battery is one part; a clear wick tank is another. There is a mouthpiece of course.

White Rhino makes the Liquid Touch in loads of pretty colors. Pick up extra tanks for various flavors of e liquid; the kind that don’t crack tanks (many tobacco, some fruit, and lots of bakery flavors, for instance).

Unlike the tiny Dube (which only looks like an e cig but is in fact a herbal vaporizer of dubious reputation), a Liquid Touch battery offers 650 mAh which is about 4 to 8 hours of vaping (not the 48 hours claimed on White Rhino’s page). You should be able to charge this battery close to 400 times.

Once a company makes one exaggerated claim, I’m not likely to believe any of their figures, so maybe you should set your sights on 300 charges. The Liquid Touch operates at a high of 4.2 volts when fully charged and takes about 2 hours to charge completely.

That tank holds 1.6 ml of e-liquid: a decent amount, probably not enough for 400 puffs though, unless you go real light. The coil operates at 2.5 ohms to 2.6 ohms resistance: about standard for decent clouds but nothing competitively thick.

What is the Liquid Touch Good for?

If this is like any other e cig, what’s so good about the Liquid Touch? The sensor is a novelty which could enable the battery to last longer. Some batteries lose the button before a battery runs out of power.

This is an excellent, discrete, portable product for travel. Anyone who is accustomed to other vape pens of a similar shape and size will probably like its dimensions very much and appreciate the choice of colors. White Rhino has a pretty good reputation, so although there are not many reviews yet owing to this being a relative newcomer, it is safe to give the Liquid Touch a try for $50.

It will not be the vaporizer you turn to in every situation, but it makes an excellent item to slip into a pocket for when you take the dog for a walk or take a fifteen-minute break at work with colleagues who won’t mind your e cig the way they detested your cigarettes.