In most cases, a mechanical mod is much more expensive to purchase than other electronic cigarettes, at least when viewing the entire picture. Usually the prices listed beside such items refer to the tube only: no tank, atomizer, battery, or charger.

When you add all of those pieces onto the price of even a really cheap mod, you are looking at an investment. If the mod is inexpensive, that investment might take you forward two or three months, maybe a year. If your investment is substantial, that mod could be the last one you have to buy.

Vapers operating mechanical mods are not able to modify the performance of their vaporizers or change the quality of vapor flavor by electronic means. The only electronic element of a mechanical mod is the battery.

Aside from that, any adjustments a vaper makes must be achieved by changing the size of a battery, adjusting airflow if a tank offers this feature, changing the resistance of an atomizer coil, or selecting different e juice. With just one button to set the device going, each mechanical mod is reliant on the expertise of its user to function well, but build quality becomes very important too.

Features of a Great Mechanical Mod

The top ten mechanical mods do certain things very well. They vent the battery properly. Their firing switch is lockable. There is overall less voltage drop owing to the type of material used to make the mod. Firing pins that adjust allow atomizers to sit properly so there is no air underneath that could cause a change in the quality of your draw.

Many of the most beautiful mods are deceptively expensive. One might believe they out-perform cheaper items, even clones that appear similar, but that isn’t always true. Often, a higher price reflects a limited edition or highly artistic mod; perhaps a device made in the United States by hand. Here are the top ten mechanical mods, most of which cost below or around $100. There are just a few exceptions and copies have been devised by some of the best clone-makers in this business (Cigreen, Infinite, EHPro, EHPro, and others.) 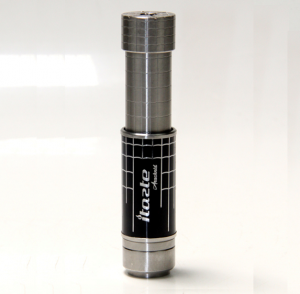 This Innokin mechanical mod looks much like the Magneto in a lot of ways except when it comes to design. A Magneto bears its spider on the button; Arachnid mods provide the webbing. Various colors are patterned with a cartoon-style web. Innokin’s version of the Magneto is even cheaper (about $40), telescopic, with an adjustable connector and locking ring.

Smok’s telescopic mod accepts all 18-series batteries to create a long or compact size of portable, personal vaporizer. Its lockable magnetic firing button prevents owners from accidentally firing the device in a pocket or bag. The use of magnets works better as these are more hard-wearing than springs. Version III is just an update of Smok’s very popular $50 product which accepts numerous atomizers, including several made by Smok (the RSST-C, Scar, etc.)
Sigelei Fu Chai 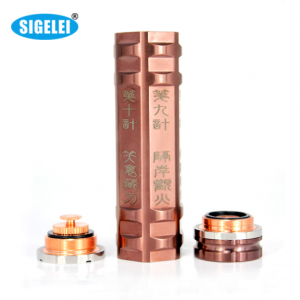 In naming these three items first, I also show that some of the top manufacturers of variable watt box mods are also capable of creating mechanical devices. Sigelei’s Fu Chai is covered in geometric metallic features and Chinese writing. The name “Fu Chai” has historical connections to a great figure in China’s history. For around $47, you can own an exquisite 18650 mod made with solid copper inside to reduce voltage drop. Adjustable copper pins also promote conductivity and durability. The firing button is recessed so you can’t fire it by standing the Fu Chai on its base. Select stainless steel, black, blue, coffee, gold, or gunmetal as your exterior finish. 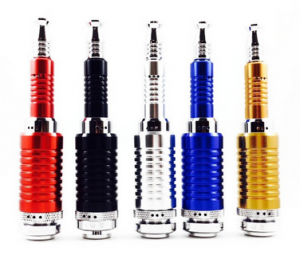 The telescopic K100 mod made from anodized aluminum and available in several colors was designed with the Empire Mod in mind. Instead of $200, however, consumers hand over about $25 to $45. It has a locking button, air holes to vent the battery, and a sturdy build which vapers love. 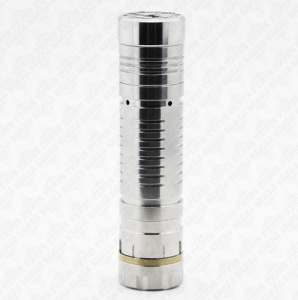 Here is an example of cloned technology which equals the original. Many vapers prefer the Panzer clone over its original, especially for the lower price, but also its many features. Reverse thread locking protects curious young people from experimenting and getting hurt or even wrecking your mod. Venting keeps the battery relatively cool unless you over-vape. Brass contacts are good for connectivity. The Panzer Clone was made to accept 4 different battery sizes, thanks to its assorted detachable tubes.

Its name suggests this device would be the enemy of any unsuspecting vaper, but the only fight the Nemesis intends to wage is against the urge to smoke cigarettes. Its main weapons are functionality and beauty. You would refer to this as a 26650 mod: wider and longer than those above. Any 22-mm RBA/RDA will fit, but wider ones fit better. Reverse-thread locking and venting are on board. The Nemesis is a top seller.

The original Stingray X is available in multiple colors and finishes, but the one that gets written about more than any other is their copper/stainless steel version. Stainless steel covers copper inlay as though copper is an accent, but this highly-conductive metal is the main attraction. It would be higher on the list but for its lofty price.

Again, you sometimes have to pay more for quality. This is one of those times. The 4Nine provides tubes to accept an 18350 or 18650 battery. It’s a simple, compact device made from 304 Stainless Steel. Stainless steel is also great at conducting electricity although not as good as copper. You will still notice a reduced voltage drop relative to mods made from cheaper materials. There is no center post and the switch is magnetic.

This 22-mm mechanical mod comes with a telescopic firing pin which can be raised or lowered depending on your atomizer. Pins are copper, the firing ring locks, and you can choose from three styles. Select 304 Stainless Steel, brass, or copper.

As the mods in this list progress, they become more expensive. AR Mods by TAC Mods are distinctive for their military-type appearance (it resembles the butt of a rifle) and all-over venting. Almost every design is meant for stealth such as camouflage or carbon fiber. Insert an 18650 battery and lock your mod with the reverse-thread feature. This is one of the most durable and manly-looking mods your money can buy and one which represents the connection between US vaping companies and US military personnel/veterans.

Good Reasons to Switch to a Mod

Consumers appreciate the waste inherent in their vaping habit or hobby. A lot of things will wind up in the garbage eventually, or a recycling bin. Batteries, tanks, coils, and wicks all become trash. The sturdy mod tube, however, is separate and does not necessarily wear out.

Why they are Called “Mechanical” Mods

The two items in an e-cig line which are known as mods are mechanical devices and APVs. Control for the latter items such as the Innokin iTaste MVP or a Joyetech eVic comes directly from a battery and built-in circuitry which allows you to view things on an LED screen or even adjust values like wattage or voltage.

For example, by turning a dial or pressing a button, you can choose how hot you want your atomizer to become and decide to drain your battery more quickly or more slowly. An LED screen (not featured on Spinner products) displays voltage, how much battery power you have left, and maybe the temperature of your battery.

Anything termed “mechanical” is controlled without the use of circuitry. It’s a bit like the difference between an automatic car and a stick-shift. The automatic makes adjustments as the car’s computer registers speed, but with a stick-shift you have to switch gears manually. Vapers with mechanical mods must manually change air flow by turning the ring on an air vent or drilling extra holes etc. There is nothing to regulate temperature except experience which tells you not to press the firing button too long for instance and vents built into the tube as battery protection.

Authentic mods are those which have been designed and created in relatively small batches, small enough for each one to be engraved with a serial number. Clones seek to replicate these items in larger numbers using less expensive methods to churn out more of them while copying certain features. Telescopic mods change their length with the use of additional tubes so that consumers can use 18350, 18490/500, or 18650 batteries.

The Stingray is a Stainless Steel budget item for $22. A Panzer Clone costs around $25. The Gnome can be purchased for around $16.

A Sentry, which looks like something you would find inside a car engine, costs about $50 and is made in black, blue, red, or silver. Aluminum threading accepts 510-threaded atomizers.

Many Filipino mods like the 4Nine Mod by Tarsius Customs are too expensive to toy with. It’s one thing to make a mistake and blow your $20 beginner’s mod, but when it costs $170, that’s an expensive lesson in how to treat a modifiable e cig.

The Bullet V.1 by Jet Creations costs a little less: $120. Like the one above this device is serialized.

An ePipe is also a mod and though it looks different from the ones above because of its hammer-head shape, prices vary similarly. Pay $35 for a basic, stainless steel device or $150-$200 for a custom-made item carved from wood. Both types are made with a delrin insulator and typically accommodate an 18350 battery. The tank for one of these would take the place of a pipe stem.