IVG is responsible for four vaping companies in the United States: Nutricig, Eversmoke, South Beach Smoke, and VaporFi. The one with the biggest selection is VaporFi, makers of the Rocket, Pro, Pulse, the Express, Orbit, Rebel, and now the VaporFi™ Vox 50 Mod. They also make e juice in thousands of flavors, $14.99 for 30 ml. 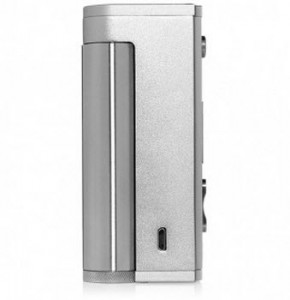 Updated: Now this machine has been released, and has been very well received. If you’re looking to get into sub-ohm vaping and create big vapor clouds, this is your baby.

For $199.99, customers will receive a compact, silver, slim box-shaped mod with soft corners. The battery case is vented to prevent overheating.

Use the supplied USB charger to recharge the battery and use the device as a pass-through e cig in the meantime. The price tag does not include a battery, but VaporFi sells those separately.

Features of the VaporFi™ Vox 50 Mod

This is a variable voltage and variable wattage APV with 7 to 50 watts capacity in 0.1-watt increments and 3- to 8.5-volt adjustment range. Threading is 510.

Since no tank is supplied, customers can use tanks specific to the VOX or a selection of products from other companies which also feature 510 threading.

Kit For All Your Sub Ohm Vaping Needs

There is also a starter kit specifically made for the VOX with a beautiful rebuildable atomizer: 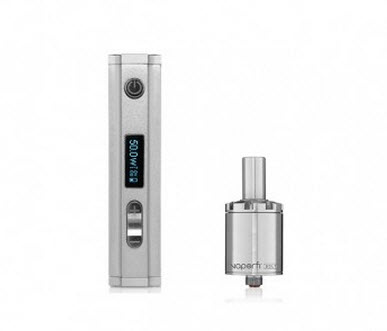 These include sub-ohm atomizers. A resistance meter not only shows the user an atomizer’s resistance rating on an OLED screen but also sets wattage in accordance with this level.

The battery will be protected against any negative effects of putting it in the wrong way around. There is low voltage and low resistance protection built in. Vox 50 Mods are made from stainless steel so as to remain durable and hygienic.

What is the VaporFi Vox 50 Mod supposed to be reminiscent of? The DNA 50 and Hana Modz are both similar in shape and offer the same power rating. An Innokin MVP 2.0 is about the same shape but much cheaper and less powerful.

Not all such mods are as reliable as a VaporFi device, however. Customers rely on this company to supply only the best products and provide a 6-month warranty to prove it. $199.99 is top-shelf pricing; the kind of fee one expects to pay for a limited edition device. Will the Vox 50 stand up to such comparisons? Time will tell.

Other Products from VaporFi

One newly released product from them is a new tank with the VOX in mind:

This tank is matched to the Volt, and is a member of the newly launched in the industry sub ohm tanks.

If you can’t afford the $200 price tag, VaporFi also carries a Rebel telescopic mod with a display screen and variable voltage. It is one of the most stunning and popular products at VaporFi (we also have discounts below to save you $20-$24).

Although the company warns against new vapers buying this product (or the Vox 50 Mod), customers claim the Rebel is almost as easy to use as their less technical products, but it’s not much cheaper. The Pro features a single button but no other controls so vapers cannot select wattage or voltage. Still, at $50 for a simple kit with the charger, battery, and tank, it offers good value for intermediate or impatient vapers.

Check it out at: https://www.vaporfi.com