A vaporizer typically accepts oils, waxes, or herbs, but not usually all three. The atomizer and tank system are not designed to adjust temperature and accommodate multiple materials, and different substances are most receptive at varying levels of heat between 200F and 400F. The Daborizer vaporizes waxes or oils; not herbs. This would be a good gift for yourself or someone who prefers wet materials over dried plants.

Daborizer Review: Is This a Magic Wand?

The Daborizer does very well in tests and scores high, but it might have already undergone some changes since its first release. The internet is not overloaded with information on this brand. Their website is a dire affair; barely helpful with a non-existent FAQ page. Potential affiliates are referred there, but I could not see one. That is also where one would learn whether the vaporizer is relatively odorless, the materials it is made from, and more.

In spite of an unhelpful web presence, the Daborizer could still be a magic wand of sorts. The company advertises it as discrete, durable, with big vapor, and a puff counter. That just gives you some idea of how much wax or oil is left before you need to refill. It has the look of a stealthy black wand too; like something which, though small right now, could produce big surprises.

Which One Is It?

I have seen two images for the Daborizer: one silver and a mite too long; the other short and black. I think the latter version is more current and possibly a response to complaints that the old one was not short enough. 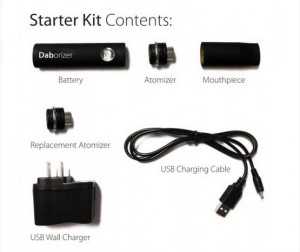 What Do You Receive in a Kit?

The Daborizer Kit contains a black battery and atomized cartridge plus a black mouthpiece, replacement atomizer cartridge, and a charging kit. The USB, wall adapter, and other parts all come in a sleek little gift box. This is organized so the unit remains still inside its box, not sliding around in transit. You should be able to find it for between $65 and $85 with the company selling it on sale for $65 right now.

If I received this box, it would be an impressive sort of gift the way it is organized; the black device against shiny white packaging.

Besides t-shirts, there are just four items under this heading and no other versions of the Daborizer on sale in different colors. They do not offer replacement cartridges. Cover your device with a removable skin for $3: camo or cigar. Buy both; mix it up. A USB cable costs $6.50 to replace and the wall charger is priced $7.25. Anyone who has seen the price of chargers from e cig companies knows these are well priced.

It’s a shame that your entire unit only lasts as long as the battery does. Rechargeable batteries usually live through about 300 to 400 cycles, but that depends on their power.

As noted before, information is sorely lacking so I can’t say if it is a 350-mAh, 650-mAh, or 1100-mAh battery. That would provide some idea of how long it should last, but being small I reckon the battery provides no more than the middle figure.

I could not find customer reviews or editorials on this product; it is a mysterious vaporizer from Anaheim Hills, California. Affiliates might want to steer clear until they can learn more about the Daborizer, especially since they only earn 5% commission (as compared with up to 25% for e cig sales from certain companies). Perhaps visit a trade show and see it in action or ask a local supplier to let you see one.

The Daborizer looks good though; a decent product at a low price. The atomizer is designed to prevent contact with plastic parts so as not to create fumes and the heating coil in its ceramic housing is easy to load. The website picture shows more clearly what you get for your money than words say.