Vaporblunt is located in California and their products are made in the USA. These include the Pinnacle, Pinnacle Pro, Pinnacle Pro Deluxe, the Baker, Palm Vaporizer (V1 and V2.0) and the Vaporblunt. This is specifically a Vaporblunt review, but will also refer briefly to some other items by Vaporblunt. 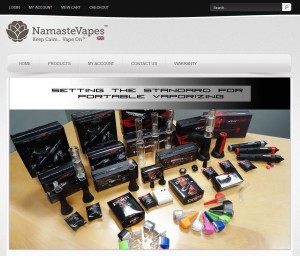 Vaporblunt released their eponymous vaporizer then proceeded to tinker with it, as all good vaporizer companies do. They take on board advice and comments (both critical and positive) from their customers and from editors of publications online and offline.

Using external commentary, they come to see what works and does not work before tweaking the original device. Version 2.0 of the Vaporblunt should be technically more sound and efficient than its predecessor.

Furthermore, the fact that they got as far as a second version tells you that Vaporblunt is a viable and legitimate company not likely to fly away in the night with your money and all hopes of customer service.

Use this vaporizer with concentrates or herbs at any altitude. Although this seems like a strange thing to say, think about where some people go when they carry a portable vaporizer around.

While lots of consumers use portable devices while they travel by car or to have with them at work, many vapers are also hikers and campers. Loads of them live at higher altitudes as well. California isn’t known for mountains, but Colorado and Montana are. Therefore, a universally useful device has to be efficient at higher elevations.

Each package comes with a trim oil cap, flavored and unflavored tip (one each), a stand, scraper brush, charger, and instructions. The original was twice as large so you get a lighter device with at least as much power for $170 to $200.

You might have noticed several companies offering water tools with their portable vaporizers. You can buy a Pinnacle Pro Deluxe kit with a water tool and also the Vaporblunt. With this tool, high-temperature vaping tastes cool and smooth. Without it, vapor might taste harsh.

It’s a matter of preference. If you have never used the tool, your experience could be excellent, but try the water tool and that changes everything. It’s like becoming used to canned food and then tasting real fruit or vegetables. Going back will be difficult.

With the water tool, your portable unit becomes unwieldy, so don’t plan on taking this out and about in your purse. It will need to be boxed to protect the glass and, at 9 ¾” long, is longer than most purse or pants pockets.

Most comments refer to this problem with the longer water tool: it’s just not portable anymore but is still advertised as “portable.” A few comments also pertain to the taste of vapor: it has a plastic edge to it unlike anything you find in the Firefly or Ascent. Some consumers have also noticed that when using the Puffit and PuffitX and also when vaping with the PAX, so this issue is not unique to the Vaporblunt.

Customers love the Vaporblunt’s black-and-red style. It looks great and feels comfortable. Heating up in 90 seconds or less, it’s fast enough for users and creates consistent, smooth vapor. Loading, emptying, and cleaning are easy. Just don’t pack herbs in too tightly. They should be ground finely then lightly tamped into the chamber.

Use the unflavored tip to avoid a loose connection. Charging requires no more than 30 minutes for the battery to last around 2 hours, although figures differ. Consumers who vape hot and draw constantly get less time from the battery than those who vape herbs and select cooler temperatures. Concentrates require higher values.

An acrylic lid on the Palm 2.0 is also a little bit vulnerable: not to the extent that glass is, but clients say they must treat it with care. The screen is small for constant refilling: every 3 or 4 draws, some say. It heats up to 470F, a temperature that will overheat herbs, which is what the Palm 2.0 is primarily made for. Concentrates work too, but vapers often think of this as an herbal vaporizer. Vapor and flavor are lacking with many people referring to tainted flavor: like that plastic taste from a Vaporblunt.

Yet, for someone with a small vaporizer fund and a desire for access to portable herbs, the Palm 2.0 fits a lot of smaller budgets at around $110. If you could pay a little more, the Magic Flight Launch Box is better (around $120, so only $10 more). Both products are made in the United States.