The logo for Protovapor resembles an atom and puts me in mind of physics class. That’s where the smart people lived breathing scientific equations about gravity and light like it was oxygen; the class I walked past at a run. I think the people at Protovapor might be that smart, although I can’t exactly tell being dim when it comes to science.

Their long, thin mod with its rectangular shape recalls the Innokin iTaste VV V3.0 but on steroids. It’s also a lot pricier at $189.99, but Protovapor only builds their devices to order. They don’t have a load hanging around to satisfy bulk orders. As you will see, there are too many potential custom combinations for that sort of preparedness. 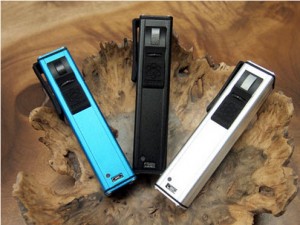 Since they are made to order, Protovapor can satisfy the tiniest whims of their clients. An order form situated online goes through several questions, mostly aesthetic ones (they already worked out the difficult stuff).

Would you like a sticky button or a smooth button? How about a belt clip? So many decisions, but there is one more: choose a battery. They carry a Sony, LG, or Samsung and two sizes: 2500 mAh or 1600 mAh.

Chip on Your Shoulder

But XPV firmware is always the same: a regulated chipset called the Evolv DNA 30. You might have heard of it. This size of DNA chip is most commonly used in box mods, but not today: you are vaping from a pillar, not a box or a tube.

DNA chips by Evolv enable your device to adjust through power settings and read ohms, volts, watts, and battery power. As they do this, they register values on a screen so the user can see if everything is good at the working end.

Their 501 connector is sealed and recessed: it can even be accidentally pushed in, but pulling the connector out is easy enough. The switch is wide, comfortable to use, and durable: good for millions of presses (I hope no one at Protovapor actually tried). It’s the sort used by NASA but sadly, no, pressing it does not qualify as astronaut training.

Reviews of the Protovapor XPV

Vapers who open their package from Protovapor to reveal this amazing mod are blown away; thrilled by their purchase. They believe it is worth the money to own a durable, reliable, high-tech item made specifically for them, not in a factory with 9,999 others on a single run that day. The battery lasts a long time and the device is light. You can hit sub-ohms with it for big clouds.

Review of the Company

They also praise the service at Protovapor where consumers find lots of trouble shooting information but also staff who are willing to back their products. I was impressed by the number of times someone would comment on a small niggle which only lost the device one quarter of a star and Protovapor still responded with an idea or offering to fix something without charge.