When you try vaping for the first time, chances are the smallest device is going to draw you in, at least if you smoked cigarettes. Cigar and pipe smokers bring a different frame of reference to the selection process. Cigarette smokers know what analogs feel like in their hands and between two fingers so an e cig should not veer far from that experience. South Beach Smoke makes the type of device these customers are looking for: a mini cig that looks like an analog.

But will this e cig provide power, realistic flavor, and other elements customers want? Here are points to look at: flavor, vapor, throat hit, cost, and battery life. Just to give you a hint, South Beach Smoke could do better, but they’re not bad. Pretty vague, I know, so read further.

Early signs showed South Beach Smoke among the front runners on the e cig charts, but they aren’t top of the pops anymore. Most of the problem has to do with new companies coming in, utilizing advanced technology, introducing better flavors, or establishing a better marketing strategy. Customers like to try something new even if old is better.

But customers also offer other clues as to why certain brands have overtaken this early bloomer. For instance, the flavor on the low nicotine levels possesses minimal throat hit. Heavy smokers aren’t going to find a cigarette alternative here. Light smokers, however, will appreciate mellow flavors and decent vapor. Their highest nicotine level (24mg) has a decent throat hit.

The size is about right. You don’t want a battery to be so small it requires charging every 90 minutes, so there has to be some give and take, but South Beach Smoke has managed to do wonders with their high-powered battery.

It’s not just better than most others: it’s amazing. Reports show individuals using it for a whole day without having to recharge. One point a customer made is that the battery is noisy. Perhaps her device was an anomaly: just one battery with issues not common to the rest of the line, or maybe it is a standard issue. You’ll have to try one and see.

That’s the battery: cartridges won’t last this long. Original South Beach Smoke flavor refills were designed for use with the old two-hour battery, but they’re probably bigger. Plan to refill more often than you recharge.

Packaging is acceptable: you won’t be overwhelmed with delight.

You can get started affordably at South Beach Smoke. Buy their smallest starter kit as a tester (pictured here). It only costs $21.99. You receive a single battery, two cartomizers, and a USB charger: enough to get the hang of screwing pieces together, recharging, puffing, etc.

The most expensive of 5 starter kits is priced $159.99 with three batteries, a portable charging case, power cig, three chargers, a lanyard, case and 20 large cartomizers. A statement like that suggests there are multiple cartridge sizes but that would be a mistake.

There’s just one: the standard cartridge, although they might be large enough to keep up with the batteries. Maybe South Beach Smoke enlarged them: that would explain their cost (we’ll get into that later).

The PCC is slim and cool. Charge values appear as though without a screen: right on the toughened plastic. The three batteries are 1 automatic standard, an automatic high-powered battery, and a manual high-powered battery. Customers choose up to four flavors, five of each. Consider that good value, especially when you pick the bundle apart and add up what it all would cost sold separately.

The average price of 5 cartridge refills, taking numerous brands into consideration, is $10. South Beach Smoke does not sell 5-packs. Overall, this isn’t a big deal. Who buys an e cig and uses just five cartridges? After you get through refills in your starter kit, you either want to vape the same brand, a new brand, or prefer not to bother. Each day you can be sure to empty one or two, possibly three. In reality, a week of vaping should get you through 15 to 30 of those little tubes.

Having to purchase 15 at a time would be fine if the price was better: $39.99 for 15 cartridge refills; $13.33 per 5-pack; over $2.60 per refill. As the savings calculator indicates, you still save money over smoking, but that’s a bit much compared to the competition.

Only the 6 newer flavors are sold in $14.99 five-packs. Value discounts aren’t even all that great. Monthly auto-shipments make a difference. Still, I’d be tempted to move on to e-liquid and a tank at this rate. If I were a newbie who loved South Beach Smoke flavors and customer service, I would be thankful to discover that South Beach Smoke has those too. 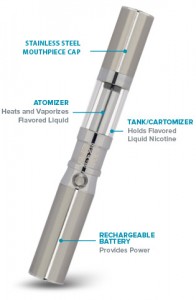 Where the VaporFi Air is squashed flat and comes in either black or white, the silver South Beach Smoke Air is silver and cylindrical. The tank isn’t massive but you have the advantage of using liquid by VaporFi (branded here as South Beach Smoke E-Liquid, but they are siblings of the parent company International Vaping Group) or any other liquid of a similar composition as long as it doesn’t crack plastic tanks.

South Beach Smoke has a reputation as one of the first and, originally, one of the best mini cig manufacturers. They have improved their battery, and the Air is a recent addition. It shows the company is listening to their customers who want more choice and bigger batteries without having to leave a company that gives them loyalty points and excellent service.

Their 16 cartridge flavors offer more choice than most mini cig brands, not to mention 4 tobacco styles as opposed to just 1 or 2. Pricing is affordable compared with smoking; power is great for a cigalike. You could do worse than buy from a reliable and tested business like South Beach Smoke.